The Smith-Mallahy-Masciarelli Funeral Home, located at 243 Water St. in Fitchburg, is the second oldest Funeral Home in the city of Fitchburg and is the result of a merger of the former Mallahy Funeral Home and John R. Smith Co. The former Mallahy Funeral Home was founded in 1874 by the late Thomas J. Butler. First located on Main Street, it was later moved to Water St . under the ownership of the late James Phelan. In 1919, the late William P. Mallahy assumed ownership and moved the business to Highland Ave. in Fitchburg. Mallahy continued until 1964 when he retired and the late Henry J. Masciarelli, a funeral director at the John R. Smith Co. since 1949 became the new owner of the firm. 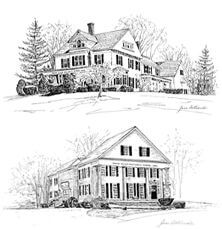 The Sawyer-Miller-Masciarelli Funeral Home was founded before 1900. The Sawyer Funeral Home, a Fitchburg historical landmark, is the oldest such business in the city. It was founded in 1868 by the late M.W. Cummings originally at 211 Main Street, and it was moved to its current location at 129 Elm Street in 1927 under the direction of the late J.L. Sawyer Sr. and H.L. Sawyer Jr.